Many buyers are, understandably, naïve to why a particular watch can be priced at one point within the monetary scale and another, seemingly similar timepiece, can be priced so differently.

Many buyers are, understandably, naïve to why a particular watch can be priced at one point within the monetary scale and another, seemingly similar timepiece, can be priced so differently. So, I have highlighted below the fundamentals to look out for that will, hopefully, allow you to be totally at ease with your next purchase of luxury/modern watches.

The obvious difference, when a closer inspection is afforded, is the fit and finish of the exterior of the watch.

As I remove these stickers and the true high level of polishing, or satin finishing is revealed, I am frequently met with gasps of awe and appreciation of the flawless mirror finishing.

Likewise, with Grand Seiko, who utilise a millennia-old polishing technique performed by master craftsmen and women to create the razor-sharp edges of Katana swords.

They are the only brand I am aware of that can make a full Titanium watch case, which is usually dull in appearance, appear steel with its lustrous finish. 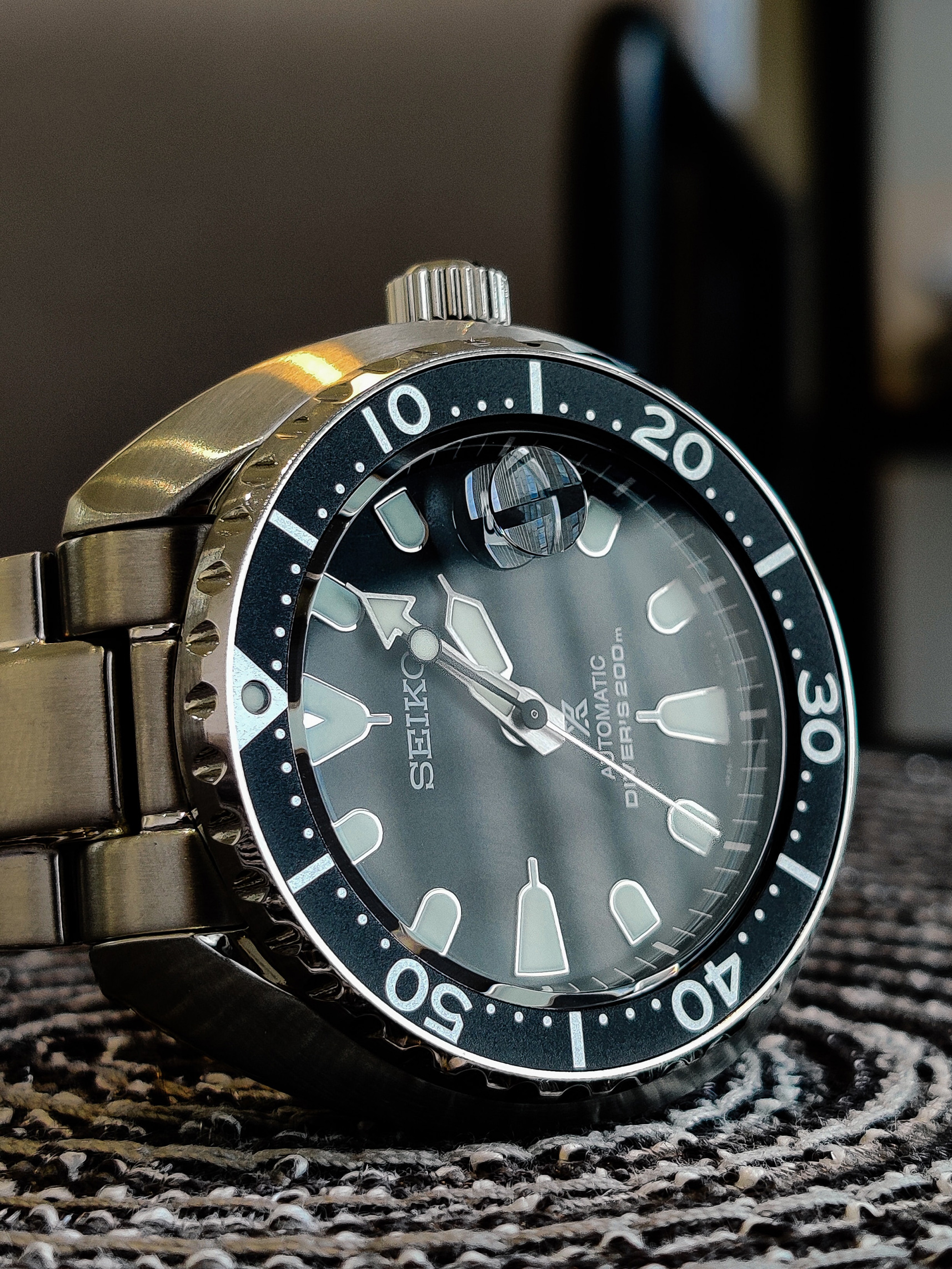 This is non-more prevalent than on my Grand Seiko Snowflake.

One of the lightest watches I know and yet is often perceived to be heavy stainless steel.

The extraordinary Grand Seiko Snowflake in Titanium without the usual dull grey appearance, due to the proprietary Zaratsu polishing

The very same high-density surgical-grade stainless is used throughout the luxury watch industry but there is an easily observable difference in the fit and finish between the different price points.

Close inspection is imperative in these situations. 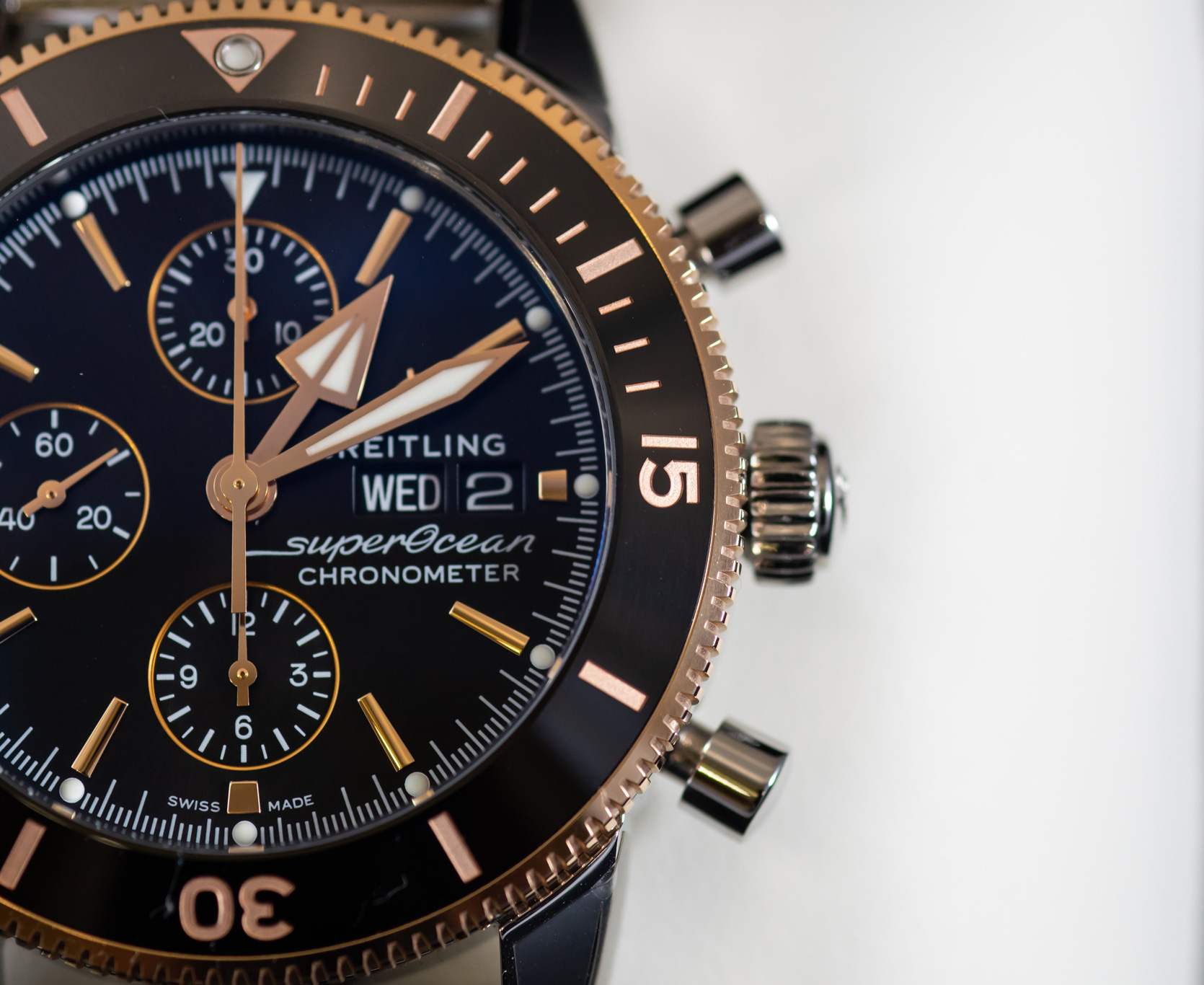 There are a staggering 86400 seconds per day.

A quartz watch is often better than 1 second per day in its timekeeping due to the nature of the battery-driven movement that are quartz regulated.

This frequency is used to allow one pulse per second.

A quartz crystal is nominally affected by temperature fluctuations and shock.

Brands such as Breitling Watches, with their thermo-compensated and shock protective movements, are guaranteed to 25 seconds and 10 or 5 seconds per year, respectively.

These high accuracy movements are available throughout the brand’s ranges of timepieces.

Citizen threw the accuracy gauntlet well and truly down this year when they created the Calibre 0100 which is accurate to a ridiculous +/- 1 second per year (or 99.999997%!).

The Limited Edition solar-powered watch housing this monumental movement looks similar to many other Citizens with sub £300 price points.

However, those in the know will readily accept the £6000 price point for this pinnacle of human endeavour within the world of quartz movements.

The mechanical watch is regulated by an escapement which creates a stop-start to the second’s hand (which is then divided down for minutes and hours) at varying frequencies, depending on the movement.

This is what gives the typical mechanical watch it’s the sweeping second’s hand.

The accuracy of these fully mechanical micro component movements is remarkable at an average of about 10 to 15 seconds per day.

This is an applauded tolerance of 99.98%. High-end brands, with impressive and cash-rich R and D departments, have been attempting to create the most accurate mechanical timepieces.

In our age of instant gratification, and “I want it now” mentality, inaccurate, and yet still relatively expensive, mechanical timepieces are sometimes frowned upon.

Brands recognise that these handcrafted marvels are not the most cost-effective option for accuracy.

The quartz crisis occurred in the early 1980s when affordable and accurate wristwatches made the expensive and relatively inaccurate mechanical watch redundant in most people’s eyes.

This is still true today but there is now a much stronger appreciation for luxury items despite their seemingly incongruous nature. 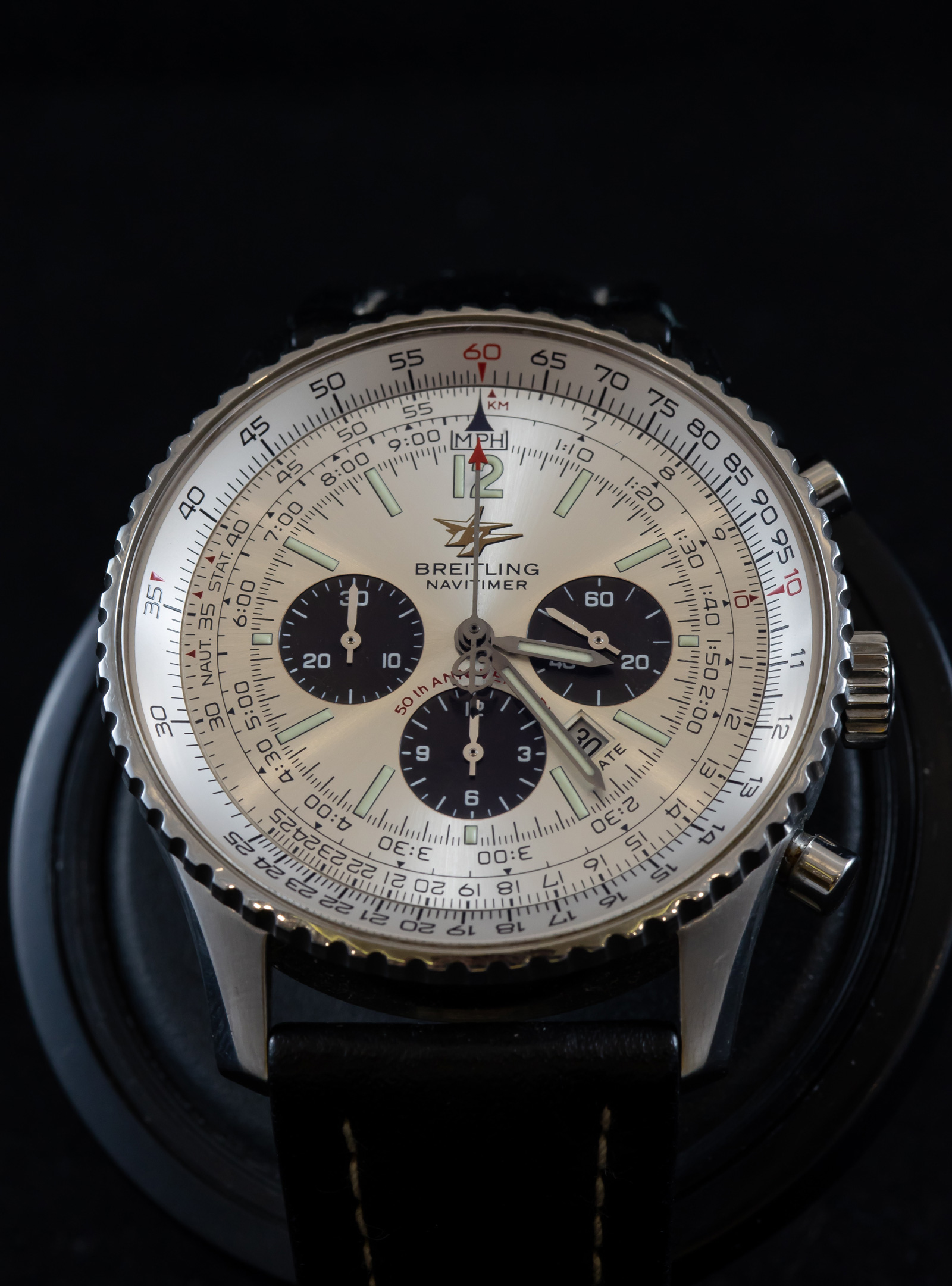 Brands aspiring to grow in this bloated market need to offer something unique.

This only works if that element offers utility.

Accuracy and reliability are, therefore, at the top of every R and D department’s flip chart or Powerpoint presentation.

The COSC (Contrôle Officiel Suisse des Chronomètres) is a third party, a stand-alone testing facility for all Swiss brands to present their movements for accuracy testing.

These tests are strict and are designed to weed out the inaccurate with tests that are based on daily use.

Therefore, different positions are tested (the escapement regulator is a wheel that spins backwards and forwards at the desired cadence that can be affected the centrifugal force of gravity) and different temperatures (the brass movement is susceptible to expansions and contractions through temperature fluctuations).

Breitling and Bremont are the only brands that send every one of their movements to this facility.

This takes me back to the hidden advantages of high-end movements.

The difference between 6 seconds a day for a Chronometer rated watch and 15 seconds per day for a non-Chronometer doesn’t sound much.

However, by the end of the week that will have accumulated to 63 seconds. Not enough for you to miss your train or your favourite show, granted.

But within 3 months you’re well over 12 minutes out.

However, manufacturers have spent untold amounts on research into new escapement designs and materials to overcome the day to day afflictions imposed upon a mechanical escapement (I’ll leave you to enter silicon hairspring, tourbillons, constant force escapements, Spring Drive, remontoir, fusee chains, etc, into your browser of choice).

To conclude, not all movements are equal, even if they seem to offer the same level of functionality. 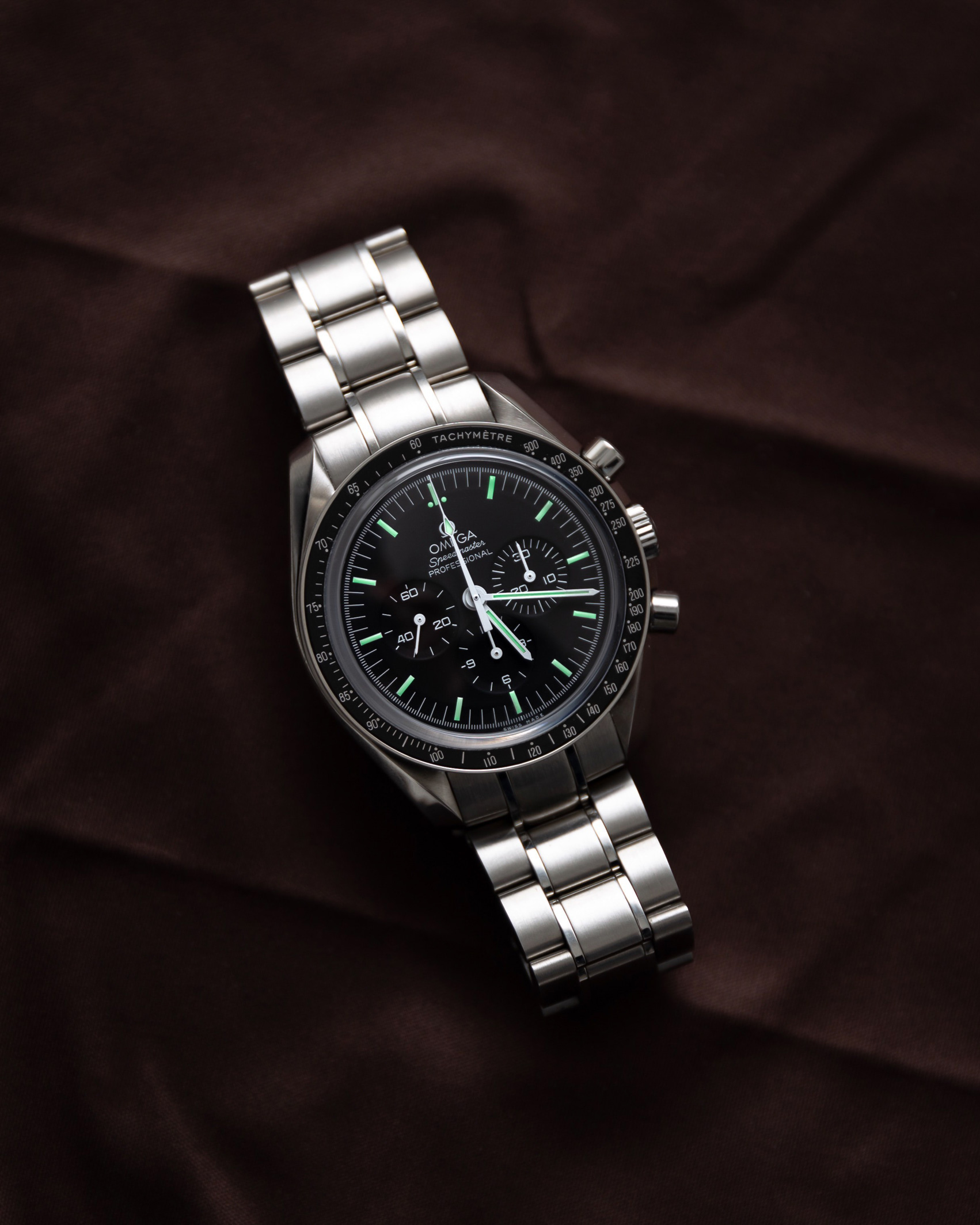 An in-house movement is very rarely obvious from the exterior of a timepiece.

This gives tighter control on quality with known employees being responsible for known assembly processes.

Grand Seiko even has one single watchmaker assemble the entire movement from start to finish.

This level of craftsmanship under one roof will come at a cost so in-house movements will be more expensive than standard movements.

Recognising the greater level of reliability this creates brands such as Breitling, Tudor and Grand Seiko all offer extended warranties on their in-house movements. 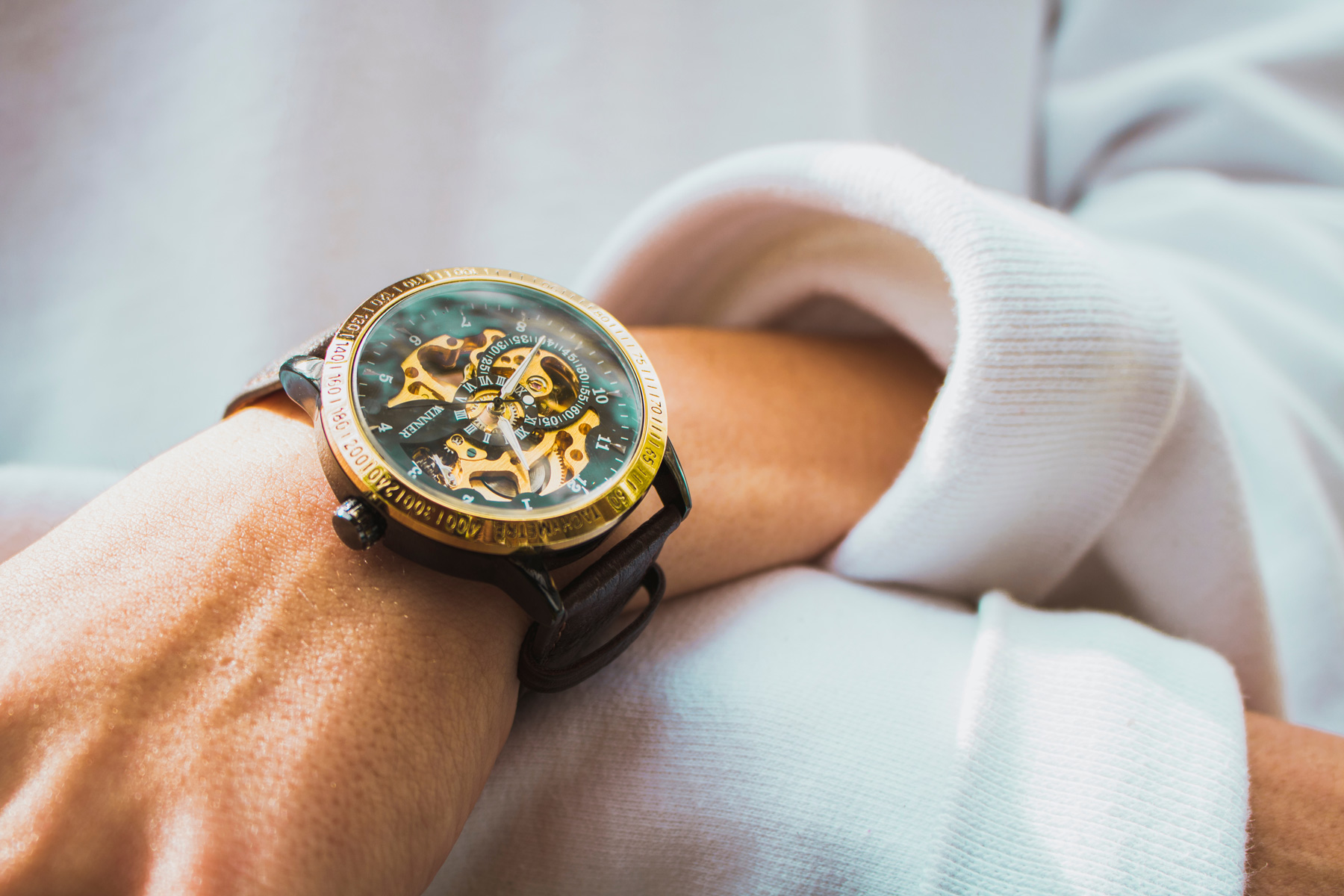 The mechanical movement is most susceptible to dust, moisture, temperature fluctuations, shocks and magnetism.

The former two should be prevented by any high end hermetically sealed case.

The latter three have caused luxury brands to experiment with materials such as silicon to overcome these frailties.

A silicon balance wheel, for example, will offer far better reliability than a standard brass example.

And yet we would never know that this expensive addition is present within the movement upon first viewing.

The standards Hamilton X-Wind alongside the Limited Edition with a silicon hairspring. £900 separates these two watches.

The most prevalent case material throughout the luxury watch industry is 316L surgical grade stainless steel.

The hardness rating of this material (which is, effectively, its scratch resistance) is 195 on the Vickers scale.

To give this perspective diamond is the highest rated material on the scale at 10000.

Many brands have attempted the watch industries equivalent of alchemy in trying to produce a scratch-proof material.

Bremont has put the most effort into this and has achieved a staggering 2000 on the Vickers scale by heat treating, annealing and bombarding the standard 316L material with electrons.

To put this into real-world context I have owned my Bremont ALT1-P1 for over a year and it does not have a single surface blemish, which is remarkable for a daily wearer.

Bremont also amalgamated with Boeing and their Advanced Material Research Centre in Sheffield.

The Boeing range of watches proffers aeronautical grade Titanium which is much harder than standard Titanium. 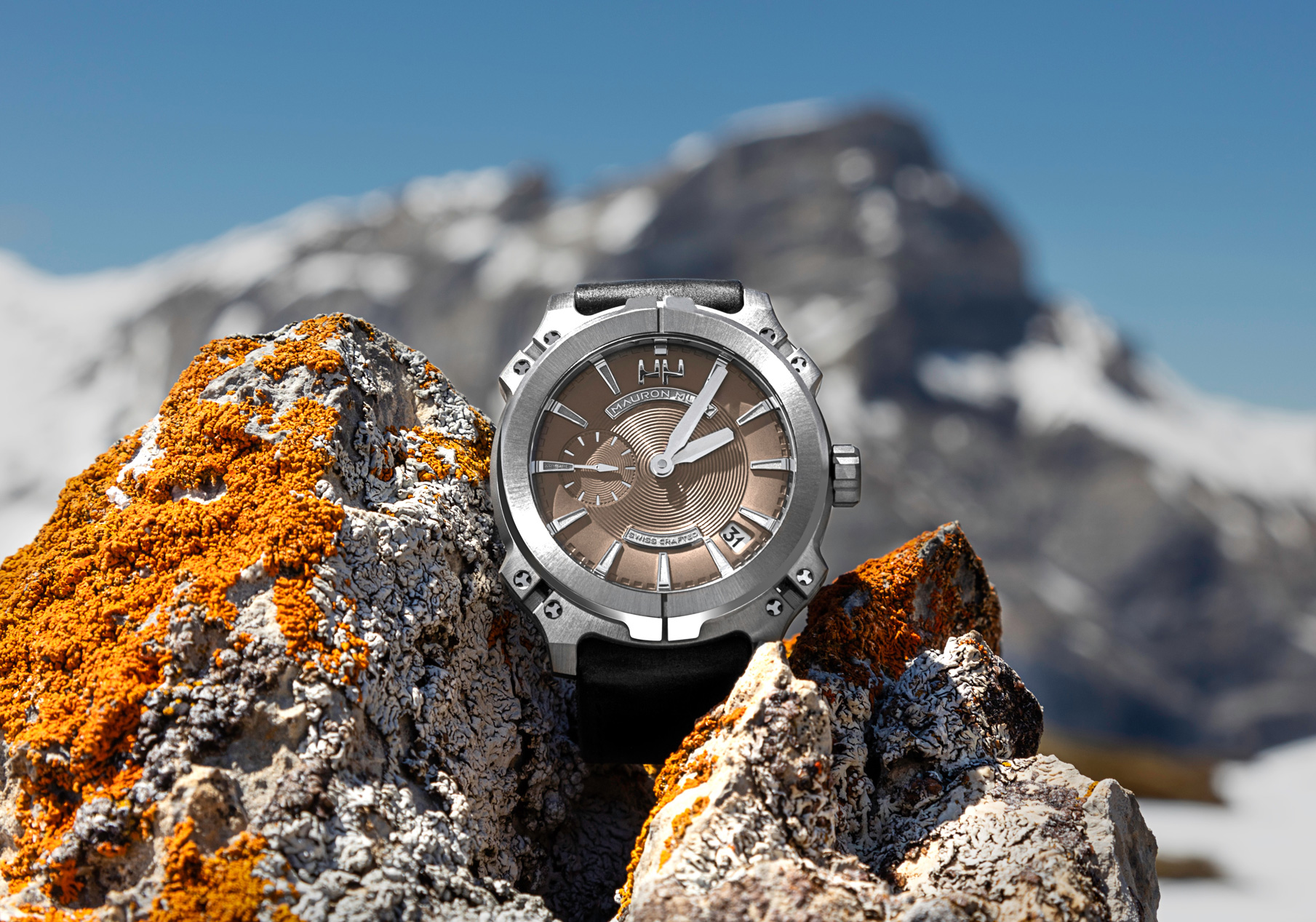 The luxury watch industry has never been as strong and is incredibly competitive.

This is great news for potential purchasers because brands are under increasing pressure to offer something unique, practical and credible within their products.

However, these technological developments are not always obvious on immediately inspecting a given timepiece.

I’ll finish as I started: Choose your new watch primarily on its looks and secondly on the way it feels on your list.

Following this quasi conclusive process consider what you are actually gaining for your money.

Dig a little deeper into the watch’s main features and you will find that you do get what you pay for.

A good quality wristwatch with the added value propositions, mentioned above, will not immediately be obvious but will become imperative to your long term enjoyment.

Author
Richard
Richard is a self-confessed watch nerd. Following his previous life of 22 years as an Electronics Engineer, he is now Living The Dream at Andrew Michaels Jewellers where he surrounds himself with his little ticking friends. He loves to talk and write about anything related to horology. He is most proud of his magazine-style watch reviews, which can be found on the blog at AMJ Watches. Follow him on Instagram as @watchnerd1970 for regular watch related content. If you wish to pick Richard’s brains on any technical aspect of your watch or your prospective purchase, etc, then he can be contacted on info@andrewmichaels.co.uk 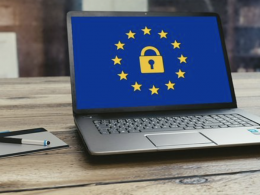 The chances are that you’ve heard the expression that no person is an island. One way of interpreting…
byAnna G
755 views 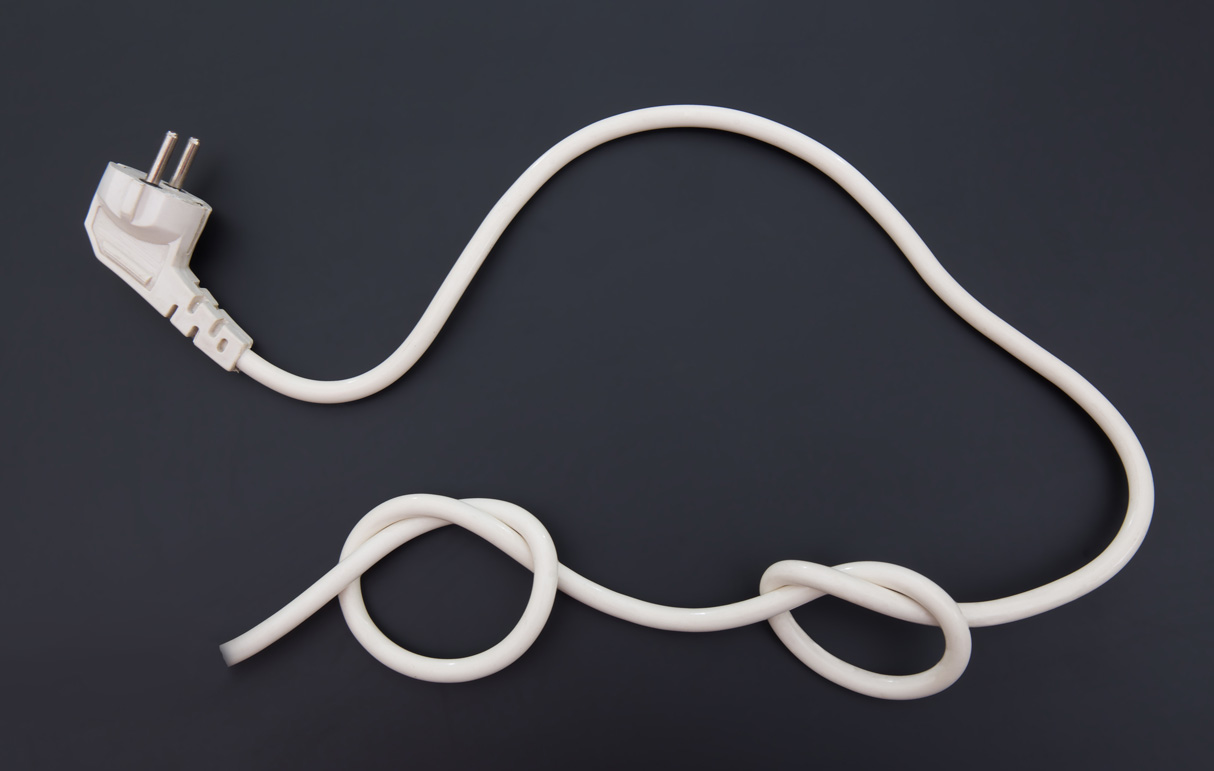 When you want to work with custom wires and harnesses, you should consider where these assemblies will work.
bySuper Groups
1.5K views 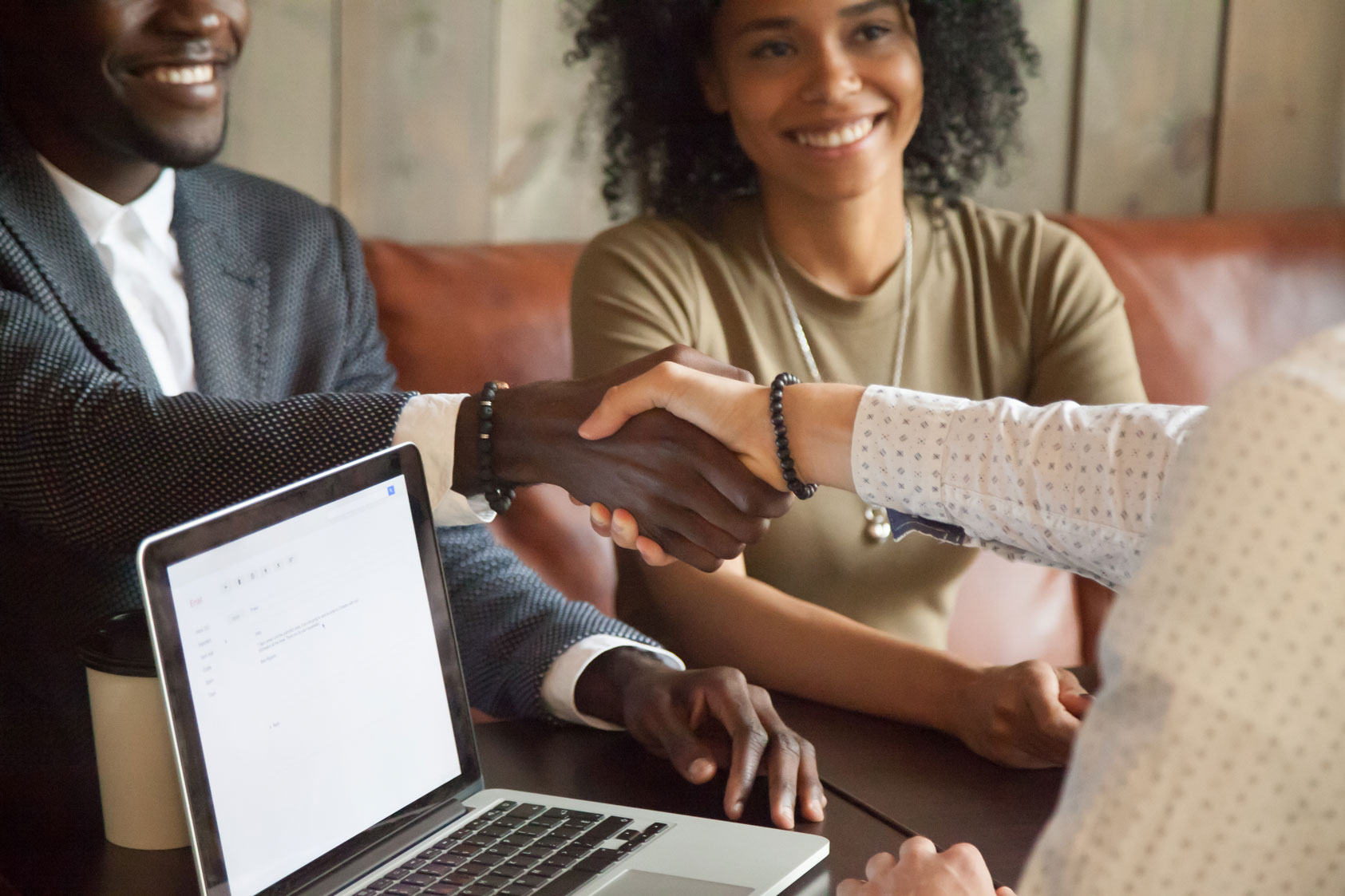 Mergers and acquisition transactions are becoming larger, more valuable, and more complex than ever before.
byLori Wade
2.6K views
1 share
1
0
0 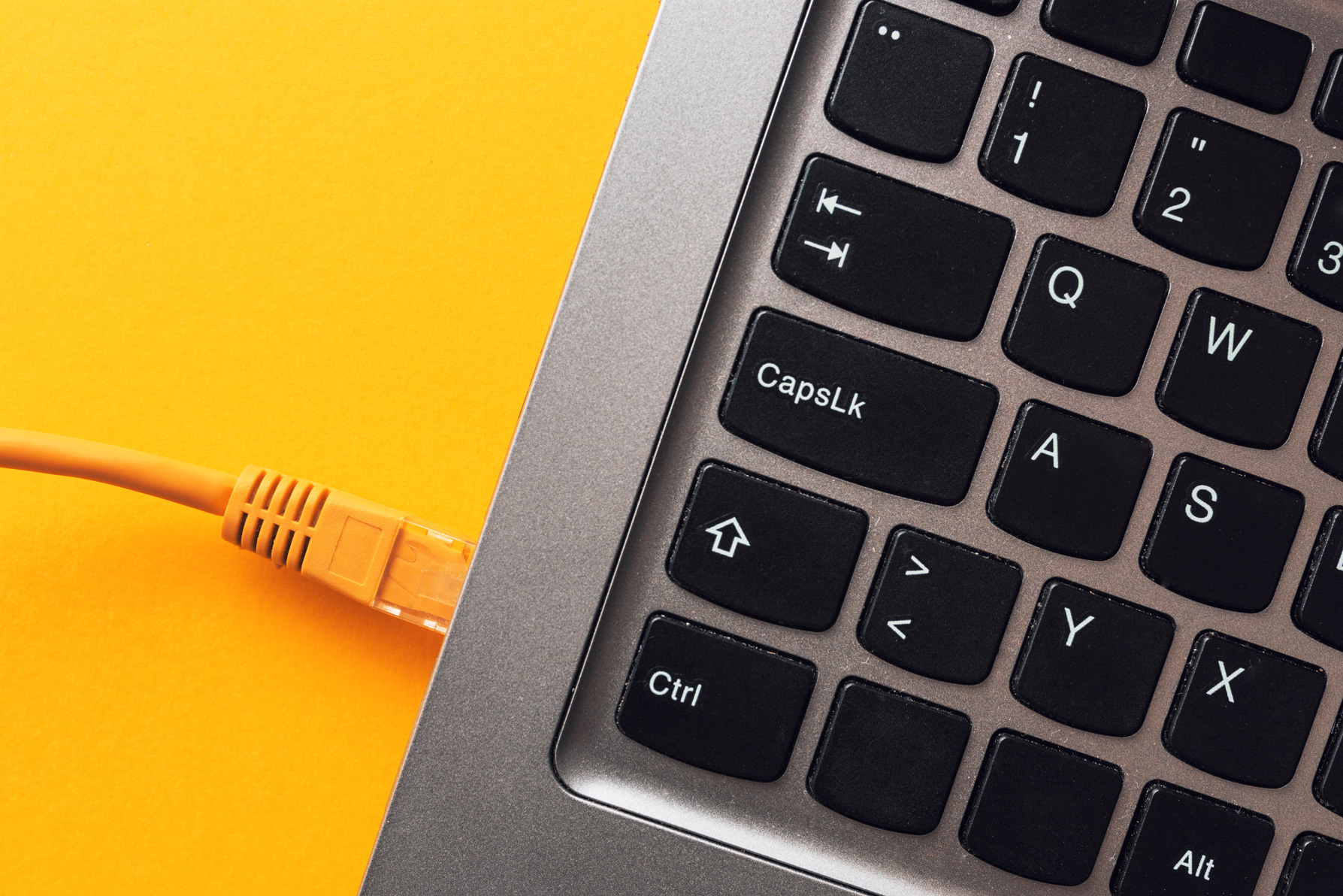 A Look at Ethernet Through The Years and Its Defining Moments